Frank Lloyd Wright is an internationally recognized architect. You can find houses and different buildings he’s designed around the country, but he spent most of his career designing and building properties in the great city of Chicago. During his 20+ year career, he designed some of the most famous buildings in the city, pioneering Prairie-style architecture.

What can you expect to see in a Frank Lloyd Wright-designed structure, and what are some of his most famous buildings in Chicago? 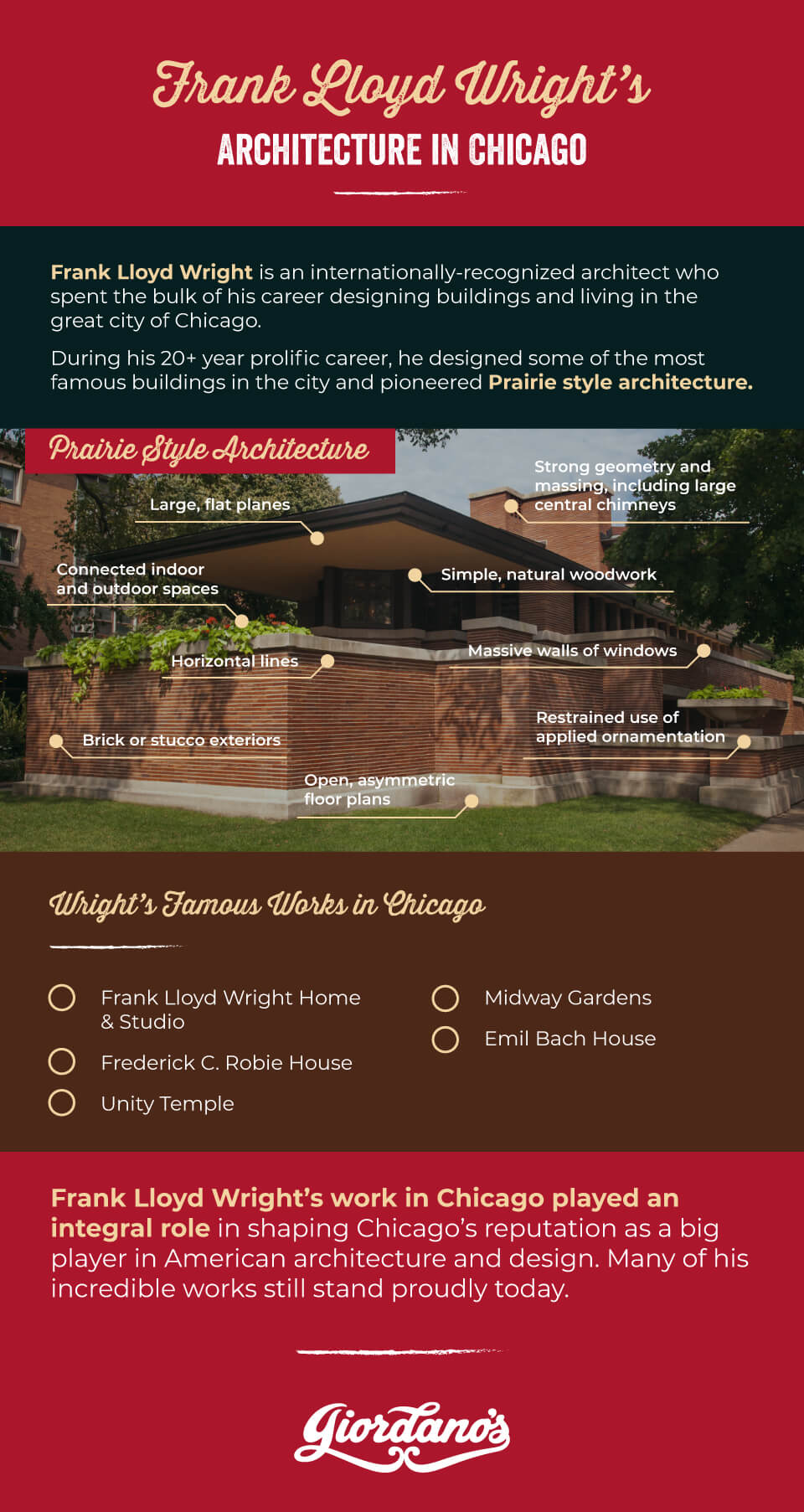 The Design Notes of Prairie-Style Architecture

What details can you look for that identify a Frank Lloyd Wright house or one inspired by his Prairie-style architecture?

Prairie-style architecture is a popular choice for homes and other one- or two-story properties. They often feature one-story projections and asymmetrical designs. You’ll see low-pitched roofs and broad overhanging eaves. They also have strong horizontal lines and ribbons of windows that surround the property’s exterior. This particular design left Bungalow-style homes in the past, instead incorporating Midwest inspirations and influences as well as some stylized Japanese elements.

These designs will almost always feature a prominent central chimney, and you’ll see them with stylized built-in cabinetry instead of cabinets simply added as an afterthought. You’ll also see a wide variety of natural materials featured in the design, including stone and wood.

Where can you see examples of Frank Lloyd Wright’s design and architectural style in Chicago? The Frank Lloyd Wright Trust hosts walking tours in the city, guiding you to many different examples of this gorgeous architecture. You can see Wright’s home and studio in Oak Park where he created many of these designs or visit the Nathan Moore, Arthur Heurtley and Laura Gale houses, just to name a few.

These aren’t the only examples of Wright’s work in the city. You can also visit the Frederick C. Robie House, the Unity Temple, the Midway Gardens and the Emil Bach House. Chicago is home to five of the most notable Wright homes in the world, but you can find his designs and influences all around the country and even around the globe.

Frank Lloyd Wright’s work in Chicago played an integral role in shaping the Windy City’s reputation as a big player in American architecture and design. Much of his incredible work still stands proudly today. Once you know what to look for, it’s easier to see Wright’s influence in antique and modern buildings throughout the city.