The History of Deep Dish Pizza 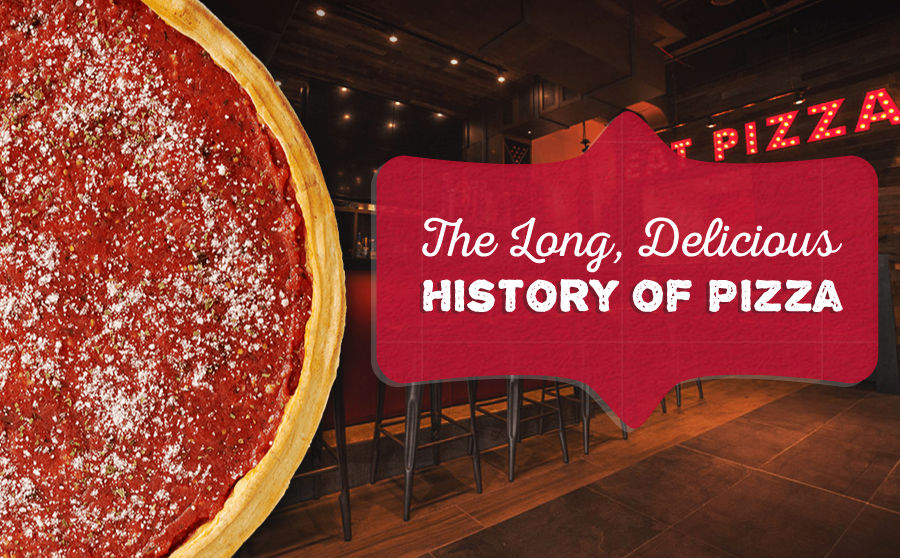 Pizza is a popular food, and for good reason. Who can resist the warm crust, the rich sauce and the gooey cheese — not to mention, the endless choice of toppings! You can always have a pizza customized to your taste, which only adds to its popularity.

Pizza is also easy to make because you can have it delivered or buy it frozen, and you don’t even need plates! Just grab a slice and start munching. It’s a food that is fun and delicious. 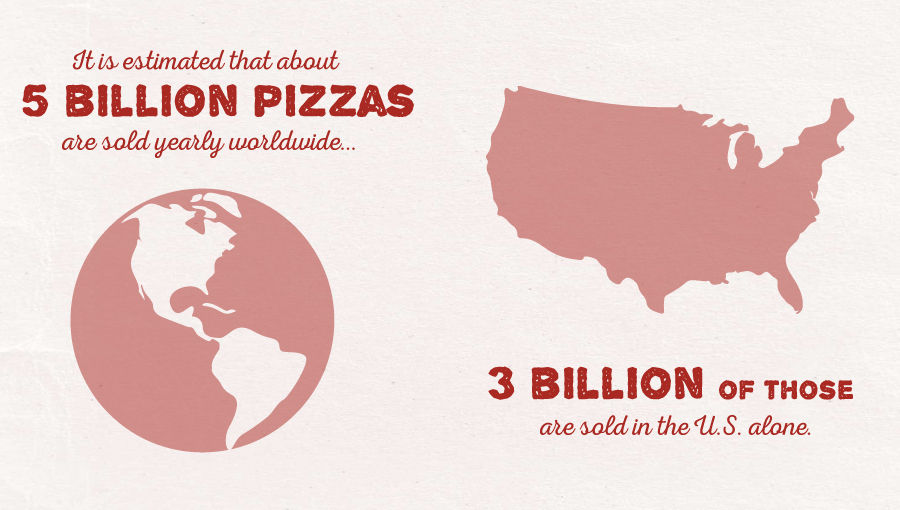 It is estimated that about 5 billion pizzas are sold yearly worldwide, and 3 billion of those are sold in the U.S. alone. Who came up with the idea of round flat bread with toppings? And how did pizza become so popular? You may be surprised once you learn pizza’s history. Pizza has come a long way and continues to evolve.

How Did Pizza Get Its Name?

The origin of the word “pizza” is not clear, but there are a few theories. One is that pizza comes from an Old Italian word that means “a point” or from the Greek word “pitta.” The word may have also originated from the Italian word “pizziare,” which means “to pinch or pluck.”

In 997 A.D., the word “pizza” was first recognized in Gaeta, Italy and began to spread to other parts of the country.

No matter how it got its name, the word today is well-known all over the world as each country has its own version of the pizza pie.

It is widely believed that Italians were the inventors of pizza, but this is not true. The origin of pizza dates back to ancient times, way back to the Persians, Greeks, Romans and Egyptians. Some original pizzas were most likely made from flat bread, known to Romans as focaccia — flat bread crust very similar to pizza crust today — and topped with olive oil, herbs and vegetables. The following timeline traces the ancient origins of pizza:

This is closer still to the pizza of today, but pizza as we know it didn’t begin to take shape until another key ingredient was introduced to the recipe.

History of Pizzas with Tomato Sauce: The Special Ingredient

Tomatoes were brought to Naples in the 16th century, bringing pizza one step closer to what we enjoy today:

Even though this version of pizza was taking off in Naples at this time, these delicious pies would not become popular in the France, Spain, England and the U.S. until World War II.

History of Pizza in the U.S.

Early on, pizzas were called tomato pies when the first pizzeria opened in New York City. These pies were put together a little differently than the pizza today. The cheese was put on the crust first, followed by the toppings and lastly the sauce. You can still find these traditional tomato pies in Italian bakeries in New York. It would be a few decades before America would experience the pizza explosion we know today.

Celebrities helped launch pizza to stardom, too. Some of the most famous Italian celebrities of the 1950s ate pizza, like Frank Sinatra, Joe DiMaggio and Jimmy Durante. And when Dean Martin sang, “When the moon hits your eye like a big pizza pie, that’s amore,” it made pizza even more popular. “Amore” means love in Italian, and people did love Dean and their pizza.

The originator of Chicago Style Deep Dish Pizza is a topic that is heavily debated, so here is our story (and what we obviously think is the original).

Mama Giordano was famous for her cooking back home in Italy in a small town near Torino. Her most popular recipe was an “Italian Easter Pie.” This doubled-crusted pizza was stuffed with cheese and became a traditional recipe for the Giordano family and a legend in her hometown.

In 1974, the Giordano brothers, Efren and Joseph, introduced their mother’s famous recipe to the south side of Chicago. People loved it, and the first Giordano’s was born.

Over four decades later, Giordano’s deep dish pizza is still considered one of Chicago’s best stuffed pizzas. Giordano’s has continued to expand, and this famous pizza is now available in other states: Indiana, Minnesota and Florida.

Pizza places began popping up all over the U.S. between 1945 and 1960. Part of pizza’s popularity is that it’s a food you can share as a group. Families or friends could go out together and share a pizza. With the food’s growing popularity, it’s only natural the pizza industry evolved and offered options in pizza types and toppings to make it easier to enjoy.

The Pizza Comes to You

Pizza delivery made pizza more convenient and more popular. Families could order pizza instead of cooking and still enjoy a hot dinner delivered right to their door. While it’s not set in stone, it is believed that Domino’s was the first pizzeria to offer this service. 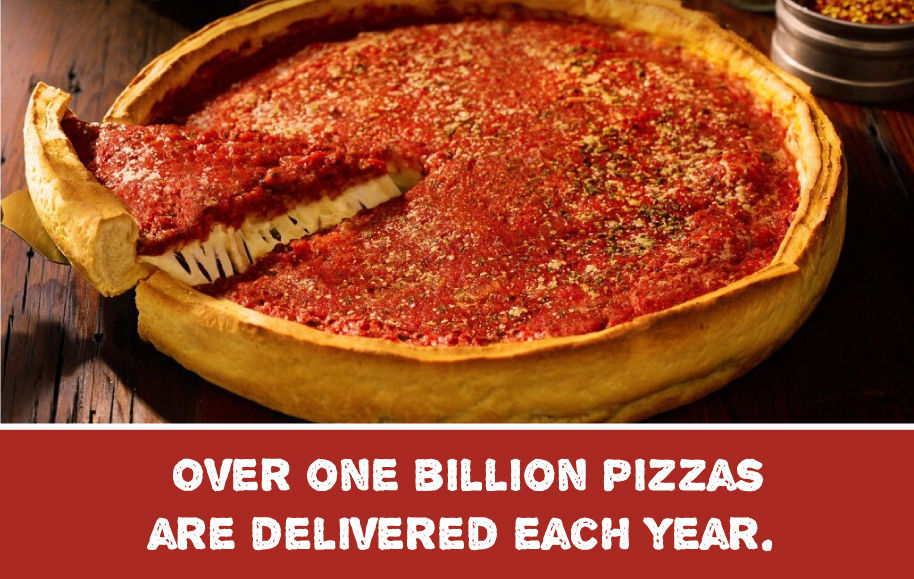 Ordering pizza has gotten easier over the years as well. You don’t have to call in your order today — you can now order pizza online or by text. And there are at least 70,000 pizza places in the U.S., making it available to everyone.

Pizza Around the World

Pizza toppings have come a long way from the meager beginnings of dates and cheese. Many people still stick with tradition. But there are so many more choices in toppings, which means makes it easier for people to create their perfect pie.

The toppings offered today range from creative to daring. You can choose some unusual foods, like sauerkraut, Swiss cheese, duck, squid, grapes and more. These toppings are not available at all pizza chains, but you can find recipes to make some unique pizzas if you feeling adventurous.

You can even eat pizza for breakfast with a crust topped with eggs, cheese and a sausage gravy sauce.

Today, it seems the toppings are endless, and you can create almost any pizza you imagine.

Pizza has spread to countries all over the world, each with its own version that vary from the American toppings:

Pepperoni is still a favorite with people in the United States, and about 252 million pounds of it is eaten yearly. Other favorites in the U.S. include mushrooms, sausage, onions, green peppers and of course, extra cheese!

Over 94 percent of people in the U.S. like eating pizza. It’s easy to get, and it’s affordable. It also includes ingredients from the four basic food groups: breads, vegetables, dairy and protein.

Pizza chains today offer much more than just pizza. Many offer salads, sandwiches, beverages and desserts, and some even offer catering services. This makes it convenient to order pizzas and other menu items for parties or just order dinner for the family after a busy week. Saturday nights are often the busiest for pizza orders in the U.S.

Pizza is and will probably always be one of the most popular foods. There are so many different varieties and choice of toppings that everyone can always get just what they want.

Pizza franchises are popular, and pizza sales are a $32 billion industry. Some pizzerias stay true to their Italian roots, like Giordano’s, a consistently growing pizza franchise that offers traditional Italian pizza recipes along with other fine Italian dishes.

Giordano’s offers catering and other options for you, so you can enjoy their mother’s pizza recipe just like those in her hometown. Mama Giordano’s stuffed pizza is made up of tender flaky crust and layers of mouth-watering flavors, setting it apart from other types of pizza.

If all this talk about pizza is making you hungry, check out Giordano’s menu and delivery options. You can also have a packaged Giordano’s pizza shipped to your home.

You can also ask about catering services. Giordano’s has a delicious Italian menu to satisfy everyone in your group or party. You can choose from starters, salads or sandwich trays, or go for the deep dish stuffed pizza that Giordano’s is famous for.