The History of the Chicago Cubs

It is no wonder fans of the Chicago Cubs bleed Cubbie blue. The baseball team has given its followers more than a hundred years of riveting entertainment and sports history. In honor of this year’s season, following the Cub’s World Series win in 2016, we are looking back on the history of Chicago’s beloved North Side team.

The Beginning of a Legend

The Chicago Cubs are such an integral part of life in Chicago, it’s hard to imagine the team under any different name. Reality is, though, the Cubs started out in 1876 as the Chicago White Stockings. The White Stockings were one of eight charter members of the newly minted National League. Before the Cubs became the official name, this famous team went by other names including the Orphans and the Colts. In 1902, a newspaper first tossed around the Cubs name, and five years later, it became the official team name.

The Good Years and the Bad Years

The Chicago Cubs started out as one of the most dominant teams in baseball. Following their consecutive World Series wins in 1907 and 1908, the team continued to collect pennants and make World Series appearances. In 1910, the Cubs won a pennant, but the Philadelphia Athletics beat the Chicago team in the World Series.

As time went on, the Cubs suffered more World Series losses. In 1918, the Boston Red Sox beat the Cubs out for the title. The Philadelphia Athletics beat out the Cubs in the World Series again in 1929. In 1932, the Cubs made it to the World Series again. This time they faced off against the New York Yankees, a team that had just won 107 games that season. The Yankees team included baseball greats Babe Ruth and Lou Gehrig. The Cubs did not win. Ruth even called his homerun at Wrigley Field during Game 3 of the Series.

In 1938, a famous moment in Cub’s history drove the team onto the road to the National League pennant. Before Wrigley Field had lights for night games — the first night game would not take place until 1988 — the Cubs and the Pittsburgh Pirates were tied five to five in the bottom of the ninth inning, and night was threatening to end the game. Cubs player Gabby Hartnett hit a home run — soon to go down in history as the “Homer in the Gloamin.’”

The Cubs made their final appearance in the World Series – or so we thought – in 1945. The Detroit Tigers took home the title. After that defeat, the Cubs entered the longest stretch of their drought years yet. The Cubs set some records, but not the kind teams want added to their reputation. In 1962 and 1966, the Cubs set franchise records for the number of lost games, and for 20 seasons beginning in 1947, the Chicago team never ended above .500. It was a dark time in Cubs history for the team and its fans.

In 1967 and 1968, the Cubs briefly emerged from their slump to pull together some consecutive wins, but it was not enough to propel the Cubs to their former postseason glory. Then in 1986, the Cubs won the National League division with 96 wins.

The 1990s were not the Cubs’ time to win the World Series, but it was a historic time for the team. Famous slugger Sammy Sosa and indomitable pitcher Kerry Wood joined the lineup and helped make some of the biggest moments in Cubs legend.

In the 2000s, the Cubs suffered a near miss for the pennant but took home National League Central title in 2007 and 2008. Fans were still left dreaming of the day the Cubs would be the top team in baseball.

Curse of the Billy Goat

Every Chicago Cubs fan — more realistically, every Chicagoan Cubs fan or not — knows about the billy goat curse. In 1945, the Cubs’ luck took a turn for the worse. Tavern owner William “Billy Goat” Sianis arrived at the gates of Wrigley Field for Game 4 of the World Series with two tickets — one for himself and one for his companion Murphy. They were turned away because Murphy was no regular baseball fan, but instead a goat. As the story goes, it was the smell that kept Murphy from entering the stadium.

As he turned to go, Sianis promised, “The Cubs ain’t gonna win no more. The Cubs will never win a World Series so long as the goat is not allowed in Wrigley Field,” according to the Billy Goat Tavern. His words of disappointment turned out to be all too prophetic.

The Cubs lost Game 4 and ultimately the entire World Series to the Detroit Tigers. Then began the Cubs’ long drought. In 1973, William Sianis’s nephew Sam Sianis brought Socrates the goat to the field in an attempt to lift the curse, but Socrates did not make it past the gate. The Cubs continued to miss out on the World Series win. Perhaps the curse was being taken more seriously because Wrigley Field’s owners — the Tribune Company at this point — invited Sam Sianis and a goat into the field on opening day in 1984. Despite repeated goat appearances in the years to follow, the Chicago Cubs would not clinch another World Series win until 2016.

With 141 seasons thus far, the Chicago Cubs team has a colorful history — never a dull moment — ranging from championship and glory to struggle and defeat. Here are just a few statistics on the Cubs’ top moments in baseball so far. 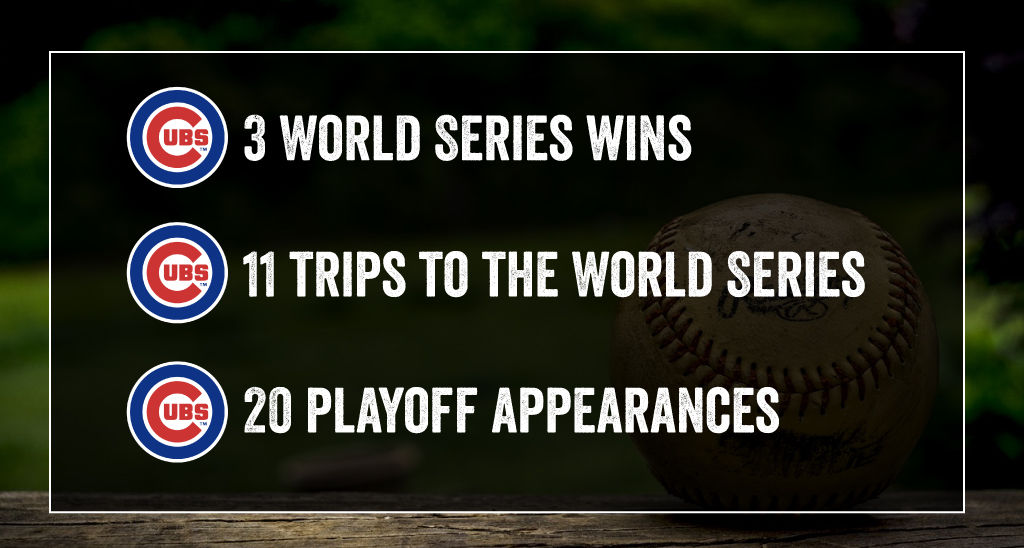 The playoffs are the road to baseball’s highest honor: the World Series. Here is where the Cubs stand on baseball’s toughest competitions:

Even the hottest teams in baseball suffer losses each season. Here are the Cub’s biggest seasons for won games and lost games, according to the Chicago Cubs website.

Teams change as players come and go, but some Cubs will never be forgotten. Throughout the team’s long history, 50 of its players have made it to the Baseball Hall of Fame.

Wrigley Field is home to the Cubs and an iconic Chicago landmark. Construction on the ballpark began in 1914, making Wrigley the second oldest ballpark in the country — it is just two years younger than Fenway Park in Boston. The Friendly Confines was not originally meant for the Cubs. Instead, Charles Weeghman, the owner of the Chicago Whales, built the stadium for his baseball team.

The Whales went bankrupt within just a few years, and Weeghman bought the Cubs shortly afterward. The Cubs started playing at the ballpark, then known as Weeghman Field, in 1916. In 1920, the park’s ownership passed to William Wrigley, Jr. With new ownership, came a new name, “Cubs Park.” Wrigley Field did not get its now famous name until 1926.

Two of Wrigley’s most famous features, the ivy climbing its walls and its scoreboard, date back to its early days. The vines were planted in 1937, the same year the field’s scoreboard was added. To this day, the original scoreboard remains, and someone still changes the score by hand at Wrigley Field.

Wrigley Field is in the midst of a massive update known as The 1060 Project. The project, which began in 2014, will likely last until 2019. The project will expand bleacher seating, upgrade the park’s infrastructure, bring video screens to the field and more. The project runners have promised to honor the classic look of the ballpark while updating it for the modern age.

Over the course of its 141 years, the Chicago Cubs baseball team has had more than a few truly great baseball players. Some players only stayed with the Cubs for a few seasons, while others spent most of their careers in Chicago. The team has retired seven numbers, ensuring those players and their jersey numbers will always be remembered.

The six Cubs who have earned a retired number include:

A few other Cub greats include Mordecai Brown, Sammy Sosa and Kerry Wood. Brown earned fame for his curveball, thrown with just three fingers. The Cubs pitcher lost two fingers as a child in a farming accident, but his injured hand never held him back. He played 10 years for the Cubs, including the World Series-winning years of 1907 and 1908. Brown had 239 career wins and a 2.06 ERA.

Sosa hit 545 home runs over the course his career. He played for the Cubs from 1992 to 2004. His legendary batting is marred by accusations of steroid use and the use of a corked bat in 2003. Yet, his strong performance as a Cubs player cannot be ignored.

Wood earns a spot as a memorable and great Cubs player because of his strength as a pitcher. Wood struck out 20 at-bats during just his fifth career game start. During his time as a Cub, he earned an 80 to 68 record and a 3.67 ERA.

As of this year, 60 different men have managed the Chicago Cubs team. Some managers have led the Cubs to the victory or through the long drought years, but it’s undeniable that the Chicago Cubs have had some great leaders. Here are a few widely celebrated Cubs managers:

“Are you a Cubs or Sox fan?” Every Chicagoan has asked and been asked that question. No history of the Chicago Cubs would be complete without talking about the team’s longstanding rivalry with the Chicago White Sox. The Cubs are part of the National League, and the White Sox are part of the American League, but interleague brings them together at least once per season. Since 1997, the two teams have played each other in the Crosstown Classic series, further fueling the North Side and South Side rivalry.

Long before the Crosstown Classic, the Cubs and Sox were sowing the seeds for an epic baseball rivalry. In 1906, the White Sox beat the Cubs in the World Series four games to two. The teams continued to cross paths during the City Series, which took place from 1903 through 1942. The White Sox again overtook the Cubs in this series with 91 wins to 60, according to SB Nation.

The energy at these games runs high for the fans and players. In 2006, the Cubs catcher Michael Barrett punched White Sox catcher A.J. Pierzynski during the second inning of a game played at the Sox’s home turf of U.S. Cellular Field. The confrontation was sparked by a contentious play. The two players collided as Pierzynski slid into home plate, but the drama didn’t end there. After the first punch was thrown, players from both teams streamed onto the field and commenced to have a no-holds-barred brawl. Players from both teams received a mix of fines and suspensions. While it called into question the sportsmanship of both teams, the fight made for a colorful addition to the longstanding Cubs and Sox conflict.

The Cubs and Sox have played each other 104 times since 1997. The White Sox have the upper hand with 55 overall wins to the Cubs’ 49 wins. The White Sox might be on top, but nothing will stop fans of both teams from gearing up for each new season of classic Chicago baseball.

The 2016 World Series is the most recent and triumphant piece of Cubs history. For the first time in 108 years, the Chicago Cubs won the World Series in a dramatic and tense series. The Cubs, carrying the weight of an entire city’s dreams on their shoulders, played the Cleveland Indians in seven games. The Indians won Game 1, Game 3 and Game 4, while the Cubs claimed Game 2, Game 5 and Game 6.

In the ninth inning of Game 7, the two teams were tied seven to seven. As if fans weren’t already sitting on the edge of their seats, a rain delay brought the game to a halt. Victory was so close both teams could taste it. After the game had resumed, second baseman and outfielder Ben Zobrist stepped up to the plate. He hit a RBI double, securing an eight to seven win for the Cubs. The Chicago Cubs are the first team since the 1979 Pittsburgh Pirates to claw their way back from three games down to victory. The curse was broken, and the Cubs were World Series champions.