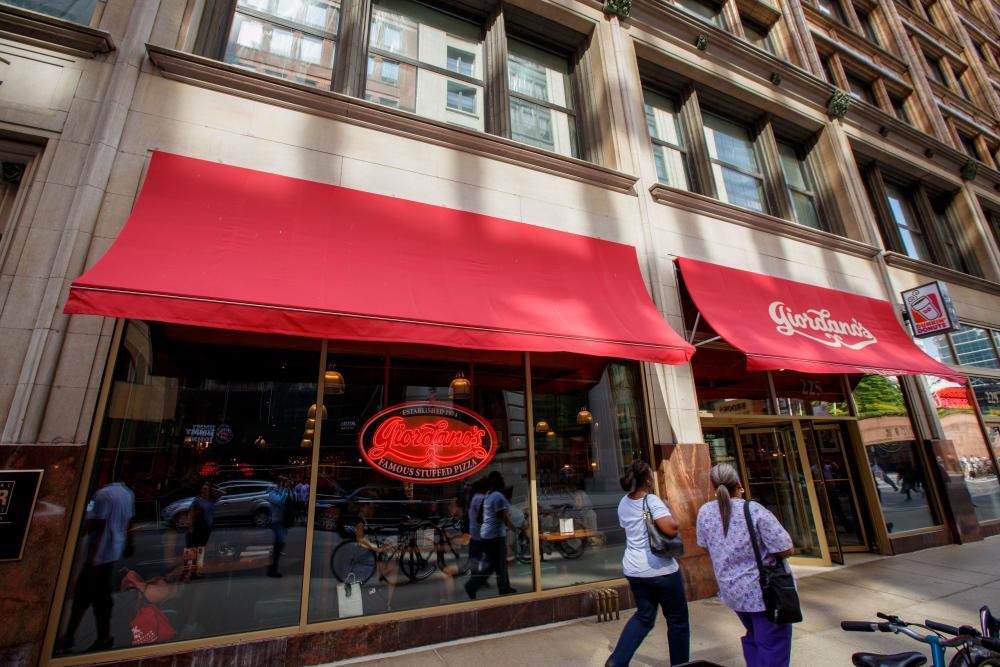 You’ll remember every bite you take at Giordano’s. Stop by our dining room and enjoy full bar service, or schedule a party in our private room. You can also order delivery or pickup to your Central Loop-area office or home!

Our Downtown Central Loop (Jackson) Giordano's location in Chicago, IL, brings the city's best pizza right to your neighborhood. We love being part of a community that gives so much to the people living here.

Chicago's history spans several centuries. While Native Americans were the first people living in the area, the first non-native settler to come to the area, Jean Baptiste Point du Sable, is considered the founder of Chicago. He arrived in the 1780s, and the native and non-native peoples shared the area until the Treaty of St. Louis came about at the end of the War of 1812. At that time, the Native Americans had to give their land to the United States.

In 1829, the state government hired James Thompson, who surveyed the new land and made a design for the City of Chicago. The community was first incorporated as a town in 1833. It was later reincorporated as a city in 1837.

The Loop is Chicago's Downtown and central business district. It is one of the city's 77 community areas and houses several neighborhoods, like New Eastside and Printer's Row.

Downtown Chicago has excellent attractions and exciting events going on year-round. It's easy to find something fun to do as a family in the area. Check out one of these for your next outing:

When you're in the mood to dine out, you won't have any trouble finding other good eats in the area. When you're craving amazing deep dish pizza in Downtown Central Loop (Jackson) in Chicago, IL, you should head on over to Giordano's — you won't be disappointed!

What better way to top off a day shopping on State Street or a visit to the Chicago Board of Trade than with a visit to the best deep dish pizza place in town? For over 40 years, Giordano’s has been more than a restaurant — we’re a cherished Chicago experience. Isn’t it time you created a new pizza tradition?

Giordano’s Is the Best Pizza Place in Town Regular pizza has crust and cheese and toppings, but it can’t compare to the handcrafted, flaky, stuffed pizza goodness that’s in every pie at Giordano’s. Every Giordano’s pizza kitchen employs 6 trained artisans who build each pizza to your specifications — and slow bake it to perfection. You’ll love our fluffy Wisconsin mozzarella and our flavorful, fresh toppings. Take one bite and you’ll see why we’re the best pizza delivery and restaurant in town!

Getting ready for an evening out at the Opera House or the theater district, and pizza won’t do the trick? Try our mouthwatering pastas, specialty Italian sandwiches, crisp salads and savory appetizers. We have gluten-free options, too. At Giordano’s, there’s something for everyone!

Plan your next event at the SkyDeck with Giordano’s. Enjoy world famous Chicago style pizza at Willis Tower VIP Style, 99 floors up! Make it a special date for two or bring the whole family for an unforgettable experience. Spectacular views of up to four states. Contact the Skydeck Sales Office at sales@theskydeck.com or call 312.875.9447.