How to Make Pizza Healthier 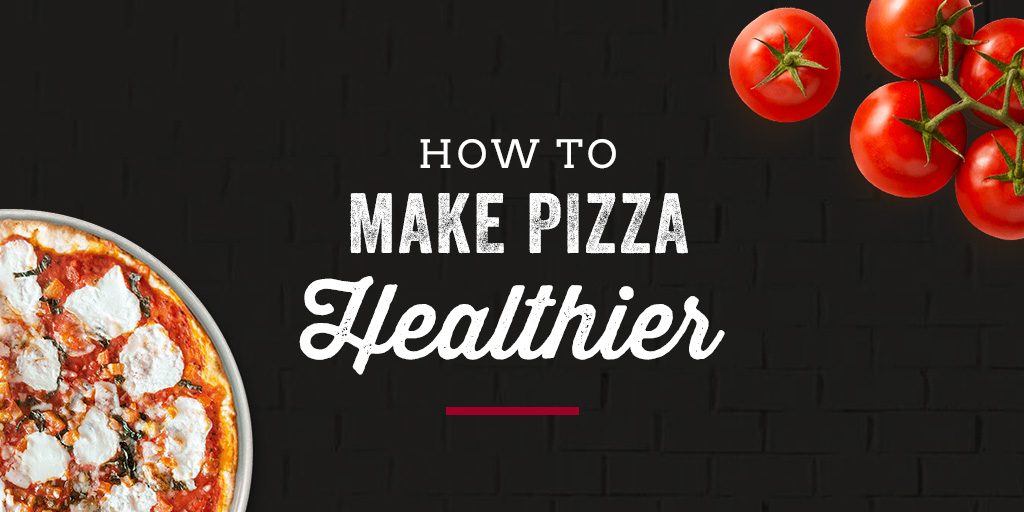 For many people, pizza is likely at or near the top of the list of their favorite foods. Unfortunately for those who are watching their waistlines or want to eat a bit healthier, pizza isn’t always the ideal option. The average slice of plain, cheese pizza has nearly 300 calories, almost 10 grams of fat, 551 milligrams of sodium and nearly 34 grams of carbohydrates.

Fortunately, there are ways to make pizza healthier, whether you’re making a pie from scratch at home or are enjoying a slice or two — or three! — out at a restaurant.

If pizza night is a regular event at your house, but you’re starting to get concerned about the fat, carbs or sodium content of your homemade pizza, a few small tweaks can help to make it healthier. Start from the bottom of the pie and work your way up to the toppings with these healthy pizza ideas.

For plenty of people, the crust of a pizza can make or break the entire pie. A crust that’s soggy or chewy or that doesn’t have that much flavor can really destroy what would otherwise be a delicious meal.

The crust of the pizza can also be a significant source of its calories and carbs. If you make your own crust from scratch, there are a few things you can do to improve its nutritional value.

Option one is to switch from all-purpose, refined flour to whole wheat flour. Whole wheat flour has more fiber and protein than white flour. It also has a stronger, nuttier taste, which can take some getting used to.

If you’re concerned that swapping out a standard pizza dough recipe for an entirely whole grain recipe will make your family less inclined to the pizza, you can start small. Instead of replacing all of the all-purpose flour with whole wheat flour, replace half of it. You’ll be boosting the fiber and the nutritional value of the crust, but the change in taste won’t be as dramatic.

Another way to make your homemade pizza crust healthier is to think beyond dough. That’s right. You don’t have to use a wheat-based dough as the base of your pizza. You can try to make a crust out of finely diced cauliflower, eggs and cheese for a low-carb alternative.

Another option is to make mini mushroom pizzas. Instead of rolling out dough for the crust, simply top a cleaned and trimmed portobello mushroom cap with sauce, cheese and other toppings.

Adjusting the size and thickness of your homemade pizza crust is another way to cut calories. For example, you can roll out the dough thinner than usual and enjoy a thin-crust pizza rather than a hand-tossed or pan pizza at home. Making pizza rounds that are slightly smaller will also reduce calories. For example, instead of rolling out a 14 or 16-inch circle, use enough dough to create a 12-inch crust.

Other healthy pizza crust options include:

Jarred or bottled tomato sauces usually have a considerable amount of added sugar, not to mention high levels of sodium.

One way to make pizza healthier at home is to choose your sauce carefully. Read the ingredients list and the nutritional information on the label. Keep an eye out for added sugar — from sources such as corn syrup or sucrose — and look at the number of grams of added sugar listed on the nutrition label. If you’re concerned about sodium content, look for a bottled sauce that doesn’t have added salt.

Another way to improve the nutritional content of your pizza’s sauce is to make your own at home. Making your own sauce, from canned tomatoes or fresh, reduces the amount of sugar or salt in it, and it also puts you in full control over what goes into the sauce. That means if you want to sneak extra vegetables into the sauce, you can. A few vegetables worth considering include:

Some pizza recipes taste delicious when you forego tomato-based sauces entirely and replace them with a light brushing of garlic oil or a buttery herb blend.

Next to the crust, it’s the cheese that can make or break a pizza, especially when it comes to nutritional content. Load up your pizza with cheese, and you’re essentially loading it up with fat and calories.

Luckily, there are many ways you can adjust the cheese on your pizza to cut calories and improve the pie’s nutrition, without sacrificing flavor. First things first, not all cheeses are created equally when it comes to calorie content. An ounce of cheddar cheese contains 114 calories, for example, while an ounce of part-skim mozzarella contains 72.

The flavor of cheese can also influence how much of it you end up using on a pie. If you believe in using multiple kinds of cheese on your pizza, look for varieties that have intense flavors, so that you can use less overall and cut calories without sacrificing taste. Flavorful cheeses that work well on pizza include:

People following a vegan or dairy-free diet should consider replacing dairy cheese with nutritional yeast, a common replacement in cheese-forward dishes. Many specialty stores and supermarkets have also started carrying several brands of vegan cheese, many of which come bagged and shredded for easier melting on pizza.

Ah, the toppings. What you put on your pizza not only gives you a chance to change its nutritional content. Pizza toppings also let you express your personality and preferences. Let’s start by talking about vegetables, as putting more vegetables on your pizza is one sure-fire way to make it a healthier meal.

Adding leafy greens such as spinach, chard or kale will increase the calcium and iron content of your pizza. You can chop up the greens and toss them with a small amount of olive oil before you cook the pizza or you can steam the greens and pile them on the pie before cooking.

Some greens, such as arugula, are better off added to the pie after cooking it. Toss a bowlful of fresh baby arugula leaves with olive oil and some salt and pepper, then sprinkle it over the pizza after it’s come out of the oven.

If you’re making pizza at home, you can use pizza night as an excuse to clear out your refrigerator and use up any leftover vegetables — raw or already cooked. If you’re stumped about what types of vegetables belong on your pizza, here’s a list to get you started:

Pepperoni, sausage and bacon — if you’re the type to enjoy meat on your pizza, you don’t have to give it up to get a healthier slice. It just helps to rethink the type of meat you use to top your pie.

For starters, it helps to trade meats that are high in fat for leaner sources of protein. Instead of pepperoni, pork sausage or bacon, try chicken sausage, salami or turkey bacon. Choosing meats that have a strong flavor, such as prosciutto, mean you can use less without giving up the taste.

It’s also fun and a bit more healthy to think outside of the box when it comes to pizza toppings. Instead of meats, consider lean sources of plant-based protein. For example, you can top your pizza with black or pinto beans to add fiber and protein to it. Or, crumble up drained, firm tofu to increase protein. You can also use tofu as a dairy-free cheese replacement on your pie.

Eggs are also a protein-packed, creative pizza topping. You can crack an egg on to the center of the pie a few minutes before it comes out of the oven or slice up hard boiled eggs and scatter them across the pizza after it’s finished cooking.

In some ways, making pizza healthier at home doesn’t have to do with what you put on the pizza, but rather with how you serve it. When it’s time to eat, try cutting the pizza into smaller slices. Divide the pie into eight pieces, then cut each of those slices in half. You’ll be able to trick yourself into eating less without feeling deprived.

Another trick is to put your pizza on smaller plates. Use a dessert or salad plate instead of a dinner plate. The pizza will take up more space on the plate, making it look as if you’re eating more.

If you’re struggling with how to make pizza healthier, consider shifting your idea of what pizza night can be. While nothing beats the first bite into a delicious slice, you can bring those familiar flavors into healthier weeknight options. Examples include pizza flatbreads, stuffed bell pepper pizzas and pizza wraps with toasted soft tortillas.

Healthy Pizza Options When Dining Out

Even if homemade pizza night is a regular event at your home, the odds are you still go out for pizza from time to time or order a pie for take-out or delivery. While you don’t get to control what goes into the crust or sauce when you buy pizza from a restaurant, there are ways to order it to help make it healthier.

Wondering what you should ask for or say when ordering pizza to make it healthier? Try these hacks:

To Blot or Not to Blot: That Is the Question

You’ve probably seen people take a paper towel or paper napkin and gently blot the surface of their pizza before eating it, to remove excess oil. Does blotting your pizza do anything to help make it healthier?

As it turns out, yes. When you blot a slice of pizza before eating it, you can remove an average of about 35 calories per slice. That’s about 10 percent of the average number of calories in a slice of plain pizza.

Whether you’re looking to add more vegetables to your diet, want to avoid eating a lot of carbs or are avoiding gluten, Giordano’s Pizza offers home-style pizza you can customize to match your tastes and your dietary needs. Take a look at our menu options and order a healthier pizza today!