Chapter 2: A Brief History of Pizza

Pizza can trace its lineage back to ancient times. Greeks, Romans and other ancient cultures all made a variation of a flatbread, like today’s Indian naan bread or Mexican tortillas.

Poor people the world over cook flatbread because you don’t need pots, pans or special dishes — just a big, flat rock in order to bake your daily bread. Topping it with whatever is at hand, or rolling it into a convenient wrapper, is the next most logical step. Workers throughout the world enjoyed flatbread treats that would eventually give rise to the pizza.

The Immigration of Pizza

America is a land of immigrants. Our ancestors all came from other places, often with nothing more than the clothes on their back and the promise of a better life in the New World. These brave souls brought with them their skills, crafts and, yes, their cuisine.

Among those who came to America were waves of Italian immigrants. Those from Naples, Italy, brought with them a working-class food we now know as pizza.

Naples was a thriving port city, and the areas near the waterfront were crowded with the working class. These people, many of whom were quite poor, had few places to cook. They often heated large, flat stones to cook flatbread, then topped the bread with cheese, meat and other items. Because they had to hurry back to work, they folded the cooked flatbread up into a pocket and ate it later, or ate it as they walked.

The very first pizzeria was founded in the year 1760 in Naples. Da Pietro pizzeria opened its doors in Naples to sell their inexpensive flatbread concoctions to hungry dock workers. At that same location, almost 100 years later, Pizzeria Brandi was about to change the course of history by transforming pizza from a frowned-upon peasant food to a gourmet treat.

Do you have a pizzeria near your college that’s called Umberto’s, or King Umberto’s? Yes, there really was a man named King Umberto, and he’s the man who made pizza respectable. Italy throughout the ages was a series of city-states, but the nation unified in 1861.

King Umberto and Queen Margherita visited Naples in 1889. According to legend, the royal couple was so sick of gourmet French cuisine that they requested a pizza to sample the local fare. Pizzeria Brandi delivered pizza samples that included a pie decorated in the colors of the new Italian flag — a tomato sauce-covered pie, topped with thick white mozzarella and fresh green basil. The queen was so taken with this particular treat that the pizzeria named the dish after her.

If you order Margherita pizza at your favorite pizzeria, you’re ordering the queen’s favorite pie! Legend doesn’t say what flavor the king enjoyed, but the royal couple not only inspired the legitimacy of pizza as a food that even royalty enjoyed, but also inspired the first known pizza delivery. Talk about making history!

Italians immigrated to the United States almost from the founding of the nation, but the great Italian migration occurred between 1880-1924. One immigrant, G. Lombardi, opened the first licensed pizzeria on Spring Street in Manhattan in 1905.

Immigrants made pizza in their own kitchens, of course, and there are rumors that street vendors sold it as well in Manhattan to the Italian community. But Lombardi’s retains the title of the first known pizzeria in America. It’s still in operation in Manhattan today, although at a different location.

Italians living in Manhattan knew about the glories of pizza, and so did those lucky New York University students who made the trek from the Washington Square campus down to Spring Street for some fresh, hot pizza. But it wasn’t until the 1940s that pizza became popular throughout America.

As World War II ended and train and car travel became easier throughout the nation, Italians moved from the crowded streets of Manhattan out west. They settled in Chicago, Detroit and other cities, taking with them their own family recipes for pizza. Regional tastes also demanded different pizza toppings, so unique flavors such as California pizza, and crusts like Chicago deep-dish, replaced the traditional Neapolitan pies.

Which cultures love pizza the most? Worldwide, pizza remains a big favorite among hungry college students and working folks alike. If you’re traveling, you’ll find it easy to order pizza in any of the following countries. But be warned: it’s probably not like the pizza you’re used to here in America. (See the section below, “Would You Like Extra Kangaroo With That Pie?”)

Countries that consume the most pizza include:

1. Norway: Norway comes in at number one in worldwide pizza consumption. Each Norwegian consumes an average of 11 pounds of pizza per year.
2. United States: Although the United States has a huge appetite for pizza, it came in second in the list. An impressive 350 slices of pizza are consumed each second in the United States.
3. United Kingdom: Take-out pizza eaten while traveling or on vacation is most popular with our British friends.
4. Germany: Move over, bratwurst! Germans consume 100 slices of pizza per second. The Germans love pizza and come in fourth on the list.
5. Italy: Sadly, the birthplace of pizza only comes in fifth on the list. But with a country like Italy, which birthed some of the tastiest food on the planet, there are so many other delicious choices that pizza may well take a backseat to any one of a hundred other dishes.
6. Russia: Russians love their sardine-topped pizzas with a shot of vodka on the side. It’s a favorite restaurant treat.
7. France: The French like pizza, but pizza consumption rivals hamburger consumption in the land of haute cuisine.
8. Australia: The Aussies like pizza, but it’s not their favorite fast food. Still, it comes in second on their list of favorite fast foods, and they rank eighth in worldwide pizza consumption.
9. Japan: The Japanese reserve pizza for special occasions such as birthdays or other celebrations.
10. China: The Chinese enjoy the typical “American” style pizza, but also prefer local takes on the fast food treat. 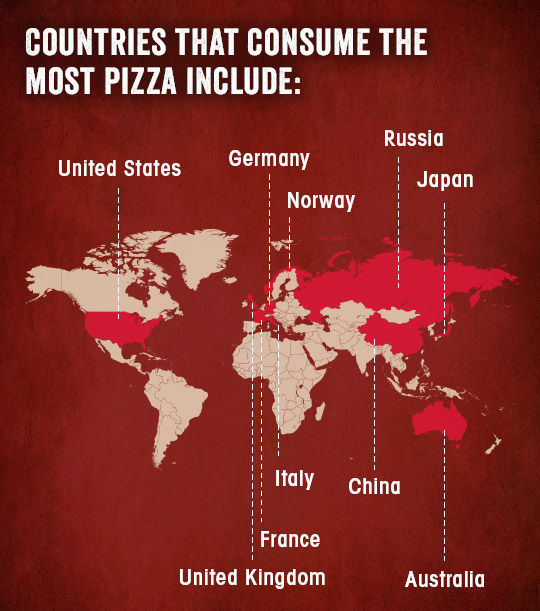 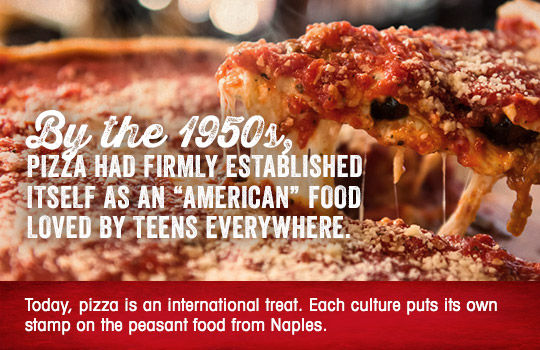