Over the past years, Denver’s population has grown exponentially. In 2016, Colorado was the second-fastest-growing state in the U.S., and its visitors and new residents continue to fall in love with the landscape and spirit of the state.

With Colorado’s natural beauty and the bustling, clean city of Denver, it’s no wonder 24/7 Wall St. has named the Centennial State the second-best state to live in, measured in terms of life expectancy, the potential for bachelor’s degree obtainment, and a low level of poverty.

Whether you live in Colorado and want to renew your love for your home state, or you’re visiting and want to appreciate the area’s rich history, you might get overwhelmed by how many options you have. So many Denver historic attractions that stem from both its Wild West, frontier history, and environmental preservation. The state has much to offer in terms of sightseeing, shopping, history, and natural attractions.

If you have trouble deciding which historic places to visit to go during your tour of Denver, you can’t go wrong with:

Throughout your visit, you’ll gain a broader appreciation for the unique history of the Centennial State and its capital city.

Since its addition to the Union 100 years after the Declaration of Independence, Colorado expanded its fame beyond being a popular site to dig for gold. It’s historically relevant in the 21st century as a hub of art, culture, and architecture. As you visit each of these four historical Denver landmarks, you’ll start to see pieces of those histories still alive and well today.

If you’re looking for the Grand Central Station of the West, the Denver Union Station will exceed your expectations. Its stunning Great Hall and ornate facade are worth the visit on its own, but the station also houses unique shops, delicious food, and the Crawford Hotel.

Construction on the station finished in 1881, and at the time of its unveiling, it stood as the largest structure in the West. Its grand appearance and 128-foot tower served as the perfect functional monument to the quickly expanding rail system. Between 1870 and 1900, the track grew from only 328 miles to half a million. This development encapsulated the consistent pursuit of expansion in search of the American Dream that defined the Western frontier.

The name Union Station came from the building’s mission — to unify and consolidate all transportation into the city. Like today, Denver needed the infrastructure to handle the consistent influx of both the people passing through and those who chose to make the city their home. Its past relevance and current functionality make this one of the most interesting historical places to visit in Denver.

Some interesting facts about the history of the station include the following.

Above the station lies the Crawford Hotel, where you can become entranced by more exhilarating architecture. The landmark offers many excellent restaurants, shopping opportunities, and gathering places to enjoy. 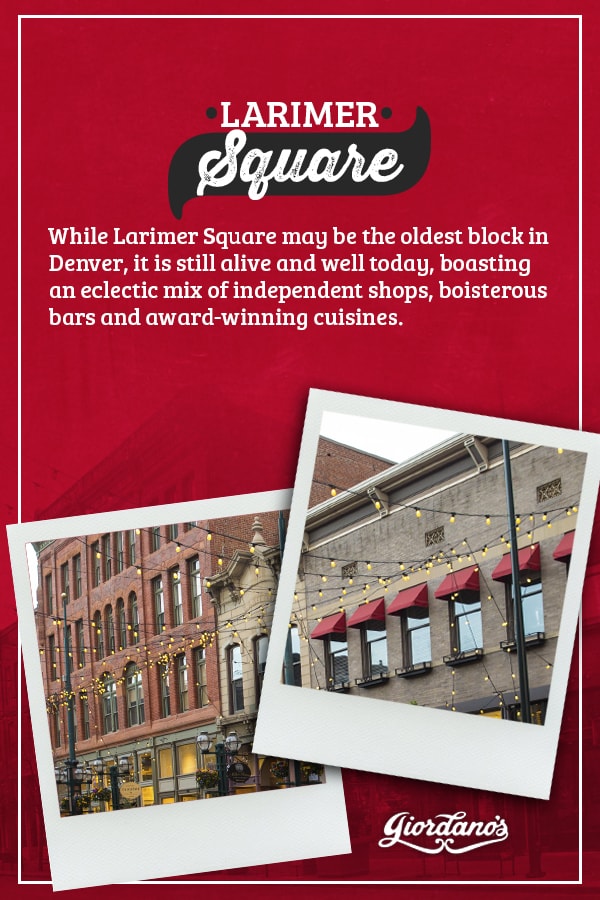 While Larimer Square may be the oldest block in Denver, it is still alive and well today, boasting an eclectic mix of independent shops, boisterous bars, and award-winning cuisines. You get the unique experience of celebrating a living history with a vibrant nightlife.

It all began in 1858 when Green Russell and a ragtag group of Georgians settled there after their initial gold strike sparked the Colorado gold rush. The street took its name from General Larimer, the man responsible for the first Denver residence. He fashioned the doors from coffins.

When the city of Denver received its official charter in 1861, Larimer Street earned the title of the city’s main street. All was well until 1893 when the silver crash stalled the economy. It wasn’t until 1916 when Prohibition brought life once again to the silent street.

In the 1950s, Denver experienced a boom, but Larimer Street got left behind. The city considered demolishing the street because it only housed unprofitable bars, flophouses, secondhand stores, and pawn shops.

In response to the potential demolition, Dana Crawford formed a coalition – called Larimer Associates – charged with bringing life back to the street in 1965. The city honored her success in 1971, as they named it Denver’s first historic district.

Although Larimer Square houses a great historical significance, it has more life today than ever before — ironic for a street initially marked by a home with coffins for doors.

With the array of high-end restaurants, extensive shopping, exciting nightlife, and fun bars, there’s plenty to do and eat at Larimer Square.

Unveiled in 1982, the 16th Street Mall is a pedestrian and transit shopping experience that stretches over a mile long. Free, continuous shuttle buses offer shoppers a lift along the one-and-a-quarter-mile mall, so you don’t get weighed down walking with heavy shopping bags. At night, you can opt for a horse-drawn carriage or pedicab so you can look up at the twinkling lights shining in the trees that line the road.

There are 42 outdoor cafes and 12 movie theaters alone, and over 250 stores make up the mall, so you’re certain to find a place you will love to shop.

The famous architect I.M. Pei designed the mall, and when seen from above, the repeating red, gray, and white granite create a pattern that looks like a diamondback rattlesnake.

During your shopping experience, you can view the D&F Tower, a historical Denver building that is a two-thirds scale replica of St. Mark’s Campanile. The original tower stands in Venice. When built-in 1909, the tower stood as the highest building on the west side of the Mississippi River.

After you enjoy shopping and sightseeing, you can cross the pedestrian paths over bridges to get to LoHi, a contemporary, sophisticated neighborhood packed with unique restaurants and enticing brewpubs.

The crown jewel of Civic Center Park, the Colorado State Capitol Building stands resolute and stately, just as it did back in 1894 when it opened. Today, this historic Denver site houses the Colorado General Assembly, and the governor, lieutenant governor, and treasurer’s offices.

Architect Elijah E. Myers designed the building. He drew inspiration from the United States Capitol building but added a Colorado twist. Builders constructed the landmark from Colorado white granite and topped it with its iconic golden dome. In 1908, to commemorate the Colorado Gold Rush, they carefully covered this dome in copper panels gilded with gold leaf from a local Colorado mine.

The Colorado-sourced materials don’t stop with the gold leaf. Builders adorned the inside with the complete known supply of Colorado rose onyx, an incredibly rare marble mined from a Beulah, Colo., quarry. Meanwhile, they used white yule marble mined from Marble, Colo., for the floors.

The beauty of the historical building in Denver continues with the stained glass windows whose designs commemorate influential people and important events from the state’s history. The rotunda on the third floor features more artwork, including presidential portraits.

When you enter, the sheer magnitude of the building will take your breath away. The main entrance hall opens up to a 180-foot expanse measured from the floor to the top of the dome. It’s the height of an 18-story structure.

Colorado became part of the United States in 1848 as a part of the Treaty of Guadalupe Hidalgo, which marked the end of the Mexican-American War. Ten years later, the discovery of gold in the area attracted a wave of new settlers in search of a fortune to call their own. This influx of settlers sparked the Plains Indian Wars from the 1860s to the 1880s, and the frontier earned its Wild West fame as violent fighting took hold of the lawless land.

During this time, Colorado, named by the Spanish for the land’s red rocks, attempted to gain statehood. It took three separate attempts and two U.S. presidents to finally earn its place as a state in the Union.

On Aug. 1, 1878, Colorado became the 38th state and earned the nickname the Centennial State, as they joined 100 years after the signing of the Declaration of Independence. The tenacity and determination of Coloradoans to earn their place in America demonstrate the grit and passion that the citizens of the state still embody today.

When you plan to visit each of the historical sites listed above, you’ll enter into a living history that signifies some of the ideals that make Colorado unique. Each of these locations plays a central role in the history of Colorado, and their individual contributions make them excellent places to visit and explore.

The most interesting part of each of these sites? They are still fully functional, and travelers and locals alike continue to enjoy them.

The history of Colorado goes far beyond a museum display. Colorado seamlessly incorporates its history into the lives of its people. This practice speaks to the state’s respect for its past and its inspiration to modernize while moving forward into the future.

Make Giordano’s Part of Your Tour

No matter where you decide to visit, if you find yourself in downtown Denver, there’s no better place to eat than Giordano’s.

Whether you need to refuel in the afternoon to prepare yourself for seeing more historic sites in Denver, or you want to unwind in the evening after a day filled with fun, a decadent deep dish from us will fulfill your cravings. Beyond our unique spin on the iconic Chicago-style pizza, we have a menu ready to serve the whole family — even those who need gluten-free options!

We want you to fall in love with Denver the same way we have. Come on down to Giordano’s to make a great day even more unforgettable.