There are probably as many kinds of pizza as there are cultures around the world, thanks to regional choices and individual tastes. It seems like each community puts their own personal stamp on the traditional pizza pie.

Hundreds of variations exist because of the different toppings and crusts that can be exchanged in a recipe, but generally, these nine are the basic pizza recipes found nationwide. 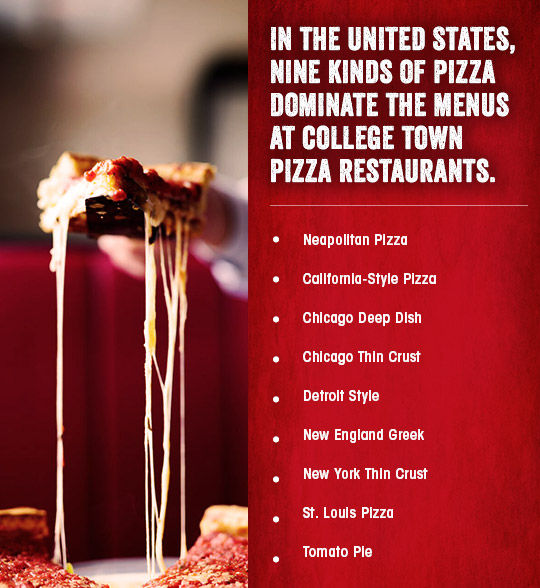 When you think of “pizza”, you probably picture a traditional Neapolitan-style pizza. This is the classic pizza served in restaurants and cafeterias nationwide.

Experts note that the Neapolitan pizza cannot have too much of anything. Too much sauce and the crust gets soggy. Too much buffalo mozzarella and the crust won’t be crispy. It’s as if the right balance between the three major ingredients must be struck or the entire creation falls apart — sometimes literally!

Neapolitan pizza cooks in under two minutes in a searing hot oven, so it’s a favorite among college town pizza restaurants.

A few important things to note about authentic Neapolitan pizza:

Californians pride themselves on their laid-back lifestyle, and that approach extends to a loose interpretation of the classic pizza. The invention of California-style pizza is credited to Chef Ed LaDou, who opened Spago in 1982. The taste sensation spread thanks to crowds who gathered at the Hollywood restaurant for Chef LaDou’s new pizza.

California pizza is based on the same recipe for New York-style thin-crust pizza, so the crust tastes and looks similar to the Neapolitan classic style. The toppings, however, are pure West Coast. California-style pizza is often topped with chicken, barbecue sauce, pineapple and a variety of exotic ingredients.

When it comes to pizza, nothing beats Chicago Deep Dish. The crust itself is thin, but it’s placed in a pie plate or a similar pan that adds depth to the crust. Inside this mouth-watering wheat crust is layer after layer of cheese, vegetables, meat and sauce.

Because Chicago Deep Dish pizzas are so thick, they take much longer than the fast-cooked Neapolitan and New York-style pizzas. These are pies meant to be savored.

Chicago Deep Dish pizzas are also assembled “upside down” because they need longer to cook, and if the cheese remained on top it might burn. Layered directly onto the crust is cheese, followed by meat and vegetables, with tomato sauce layered on top.

In the 1970s, pizza landmark Giordano’s developed the stuffed pizza — an even thicker version of the Deep Dish that had pizza lovers swooning. To keep the thick concoction from dripping out into the pizza oven, and to help it cook effectively, a layer of dough was added over the top of the pie, with a hole in the center to vent steam. Traditional stuffed pizza has another thin layer of sauce over the dough.

Take a New York-style thin-crust pizza, which is based on traditional Neapolitan pies, and make the dough crispier. That’s basically a Chicago thin crust. These pies are cut into squares, called tavern cuts, and variations in the region also include a spicier sauce. Zesty toppings like onions and olives are also popular on Chicago thin-crust-style pizzas.

Detroit-style pizza borrows elements from the Sicilian slice and the Chicago Deep Dish pie to meld them into a deep, delectable square-cut serving of cheesy goodness.

Detroit-style pizzas are baked as thin-crust pizzas inside special pans so that the pizza has a depth of at least an inch. The pans are oiled with olive oil so that the dough forms a rich, golden-baked crust. The dough may be baked for a short time before the interior ingredients are added.

Into this golden shell, cheese and marina sauce are layered, baked, and sometimes served with a fresh spoonful of piping hot marina on top. Although this style is quite popular near Detroit, the taste sensation is now spreading throughout other areas of the United States.

The Greeks might be a little miffed that their original flatbread meals gobbled down by Aristotle’s and Plato’s hungry students were co-opted centuries later by Neapolitan dock workers. They took the classic pizza and created a unique, thick crust that tastes like a cross between Sicilian and New York-style pizza and put a Greek spin on it.

Created in Boston by Greek immigrants, Greek pizza today may be topped with feta, olives, and artichokes and sweet tomato sauce, or a traditional marinara and mozzarella on top of the unique crust. The crust is always thick and sometimes golden, thanks to the liberal use of olive oil during the baking process.

If you’re going to college on the East Coast, and you’re used to pizza from other areas of the country, prepare yourself for a New York thin-crust pizza. It’s the classic pizza that Manhattanites have grown to know and love. It’s a spin on the classic Neapolitan pizza with a blander taste and more cheese.

New York thin-crust pizza begins with a thin, wheat-based crust topped with a drizzle of marina sauce and plenty of shredded mozzarella. As any true New Yorker will confirm, eating a New York-style thin crust with a knife and fork will earn you jeers. Instead, fold it over like a good New Yorker, grab a handful of napkins, and dab your shirt off later as you eat and run.

College students love New York thin crust for just this reason. It’s an easy pizza to grab on the go, eat on your way to class, or gobble as you head towards the library. For students at New York University, Fordham or Columbia University, it’s an enduringly popular mealtime choice for many.

St. Louis-style pizza is either an acquired taste. Either that, or you’ve got to grow up in St. Louis to fully appreciate it. It certainly doesn’t taste like other types of pizza. The dough is made from unleavened (without yeast) bread, so it tastes more like a Matzo cracker or tortilla chip than anything else. Provel cheese and tons of toppings make this a pizza to eat with knife and fork.

Don’t get weirded out, but St. Louis pizza may be the ultimate “eat it cold” pizza. That’s because Provel is a manmade cheese substance that remains gooey even when cold. So, for those living in a dorm room with only a microwave oven, take heart. You can enjoy next-day pizza without the soggy crust. Nothing seems to harm a day-old St. Louis pizza.

The Tomato Pie may also be called a Philadelphia-style pizza. Italian immigrants brought this style to the city of brotherly love in the early 1900s.

The Tomato Pie is a thick bread-crust pizza topped with “gravy” — the Italian word for sauce. On top of the sauce, a thin layer of Parmesan is sprinkled, and that’s it.

Chefs say “the gravy makes the pie” when they refer to Tomato Pie, because it’s the flavor of the sauce that distinguishes each maker’s creation. Many Philly or Tomato Pie pizzas are baked in clay or brick ovens to make the crust extra-crisp and firm so it holds the sauce better.

When you order, the server will ask you if you want middle, corner or side. If you love the crust, go for corner. If you want more sauce, order the middle. It’s that simple. Make sure you grab a lot of napkins, because it’s messy. Or eat it with a knife and fork.

Chicago Deep Dish comes in right behind New York-style pizza in informal polls across America. And the king — or perhaps we should say queen, since the restaurant’s star recipe was created by a woman — is Giordano’s Deep Dish pizza.

Mama Giordano was famous for her “Easter Pie,” a stuffed crust-type pizza that she made each year for her family in Torino, Italy. When two brothers founded Giordano’s, they recreated their mama’s beloved recipe. The brothers opened Giordano’s in 1974 and history was made for pizza lovers worldwide. 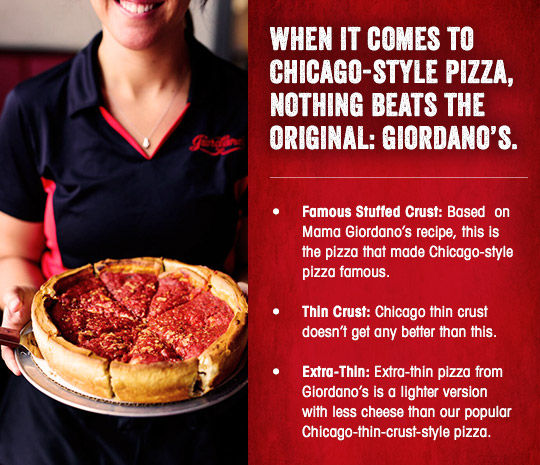 If you’re in the Chicago area or attending one of Chicago’s excellent colleges and universities, then Giordano’s pizza is the best way to taste the rich tradition of Chicago-style pizza. But even if you’re not local, you can still get a taste of Giordano’s authentic Chicago-style pizza thanks to Pizza Care Packages! It’s pizza delivery with a twist. (Learn more about this in Chapter 7!)

Download the full guide!
Return to Chapter 2Go to Chapter 4: Is Healthy Pizza Possible?
Hungry Yet? Order A Pizza Now!