Styles of Pizza Around the World 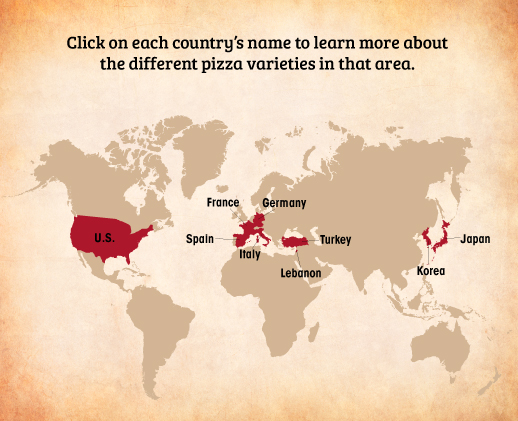 Pizza is one of the most popular foods in America. Almost everyone likes pizza, and it is economical for parties, large gatherings, or just feeding the family on an average Tuesday night. According to the U.S. Department of Agriculture, “about one in eight Americans consume pizza on any given day.” Whether they like the convenience, the flavor, or both, Americans are hooked on this portable Italian food, which has almost completely lost its ethnic origins.

Italian immigrants introduced pizza to America in the late 1800s. It was cheap food that reminded them of home and remained in the Italian neighborhoods until 1905, when the first pizza parlor was licensed in New York City. From there the phenomenon grew beyond the ethnic neighborhoods and eventually consumed the entire nation. New York has a strong pizza history; a couple of the original pizza restaurants opened in the early 1900s still operate today.

Like everything else, pizza took a long time to travel from the East Coast to California. Its first stop was Chicago in the 1940s, where it got a foot-hold with second-generation Italian immigrants expanding westward and developed a Midwestern spin. New York-style pizza didn’t hit the West Coast until the 1980s and was definitely influenced by the health craze that came before it.

What Does Pizza Really Mean?

The word for pizza in any language generally refers to the flattening or pressing of the dough to make a crust. That dough can be made of any consistency and flavor. Many are raised with yeast to yield a soft, fluffy texture. But the dough can also include other ingredients for leavening such as baking powder or eggs.

The dough used for a pizza crust may also vary in flavor:

The consistent effect of all varieties of pizza crust is to increase portability. In most cultures, pizza is a portable food eaten with the hands and sometimes on the run. At its most essential, pizza entered most countries through the poor neighborhoods as a means of feeding a family with few resources. It is easy to make, with few ingredients required.

Topping a pizza is where most of the fun takes place. All worldwide versions of pizza are based on local ingredients and flavors. Around the world there seem to be no taboos for pizza topping. If you can eat it, you can put it on a pizza. From seafood in Japan to cream and bacon in Alsace, every region of the world has experimented with creating a signature pizza flavor. In Asia, especially Korea, where pizza is a more recent phenomenon, the experimentation continues! 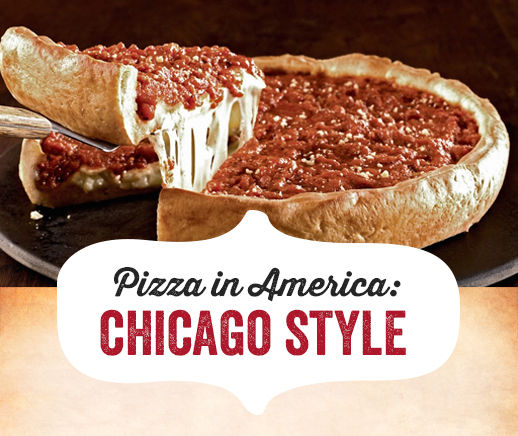 The original recipe for pizza contained just tomato sauce, basil and cheese, representing the three colors of the Italian flag. As news of this delicious, simple, portable food spread, the recipe expanded to incorporate different ideas and tastes. Today, you can get almost any toppings imaginable on a pizza.

Like many other foods, pizza has developed a regional flavor. In New York, the American epicenter, pizza maintains its traditional form. The crust is thin and soft, topped with tomato sauce and cheese. Other popular toppings include sausage, mushrooms, peppers and onions, but pepperoni is the most popular pizza topping in the entire country.

If you get pepperoni on your pizza in Chicago, though, you will need a knife and fork. The best Chicago-style pizza is called deep dish because it is made in a deeper pan with more toppings than the New York version. In the 1940s, a couple of Chicago entrepreneurs developed the recipe with a few variants:

California really turned pizza on its head, though, by bringing it into the epicenter of the organic food movement. Californians placed an emphasis on vegetables to attract the attention of trendy vegetarians. In California, pizza also went high-end. In the 1980s Spago, one of the first chef-owned restaurants, featured a pizza topped with caviar as one of its signature dishes. Veggie pizza also has its origins in California.

While hard-working immigrants from many countries were settling in America and developing its eclectic cuisine, pizza was making its way around the world. In some instances, it is hard to say if the Italian version came along and was then altered according to local flavors or if pizza was simultaneously invented in different parts of the world as a basic part of the indigenous cuisine.

In every culture, pizza began as a basic, inexpensive way of feeding a family. It can be made with just a few ingredients and customized to accommodate availability of local foods. One thing is sure, if you sample the pizza from different locations around the world, you will taste a variety of flavors. As one might expect, these different styles of pizza reflect the national taste and culture. 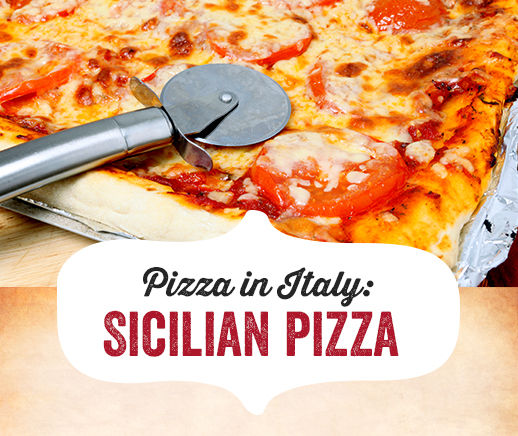 Pizza bianca is made with a thin crust, sometimes almost cracker-thin and crispy. The crust is topped with olive oil, garlic and cheese. Other toppings such as sliced olives, anchovies and fresh herbs like parsley and basil are sometimes added. Another variation of pizza bianca starts by spreading ricotta on the crust and then adding other ingredients on top.

The pizza in Spain, called coca, is made with slightly lighter dough than in Italy, and it is often rolled out very thin. Like pizza in other countries, coca has a number of variations, but the traditional recipe includes caramelized onions and chorizo, a Spanish-style sausage that is very spicy. Diced or sliced fresh vegetables, anchovies, and olives can be added. Like other Spanish dishes, coca leans toward a spicy, peppery flavor to make it authentic.

French pizza, or tarte flambee, originated in the Alsace region of France and is considered a specialty there. Similar to Italian and American pizza, it begins with a soft, thin crust of yeast-raised dough. The traditional toppings for tarte flambee are crème fraîche, caramelized onions and lardons.

Crème fraîche or fromage blanc are used interchangeably almost as a sauce. They are both soft and creamy with a delicate, sweet cheese flavor. Sweet caramelized onions balance the salty lardons — bits of pork fat — in this savory concoction.

Another variation of pizza popular in France is pissaladiere, which originated in Nice. The dough is thicker than Neapolitan pizza, and the traditional toppings include caramelized onions and anchovies. Salty anchovies are used to balance the sweet flavor of the onions instead of lardons like in the tarte flambee. This difference is probably due to the fact that Nice is a coastal region while Alsace is not.

Flammukuchen is the German version of tarte flambee, also originating in the Alsace region. As the recipe for this comfort food moved across the border into Germany, some variations took place. Flammukuchen is traditionally prepared with sliced raw onions, not caramelized onions like the tarte flambee. Raw bacon is also substituted for the rendered lardons.

As the ingredients cook together on the crust in a hot oven, the melting bacon fat protects the crust from drying out, since there is no sauce to protect it. Crème fraîche also mixes with the bacon fat to moisten the onions while they cook. The result is a more rustic, less-refined version of tarte flambee.

On the other side of the Mediterranean, pizza takes a similar form but the flavors are very different. Instead of the sweet and salty balance of caramelized onions and bacon or sweet tomato and spicy sausage, these pizzas have an earthier flavor. Instead of a bright red flavors, eastern Mediterranean pizza is more of a savory brown.

In Turkey there is a meal prepared on a flatbread that resembles pizza called “lahmacun.” It is no surprise the Turkish version of pizza includes lamb, since it is a popular meat throughout Middle Eastern cuisine, which Turkish food is descendent from. Lahmacun is made with ground lamb, tomato and a unique blend of spices on a flatbread crust. Cumin, paprika, cinnamon, garlic, onion and cayenne pepper provide the flavor for this spicy meal.

Lahmacun is a traditional Middle Eastern dish that is sometimes attributed to the Turks, the Greeks or the Armenians. Everyone in the region wants to claim ownership of this delectable treat. Lahmacun is just as easy to make as American pizza:

Further down the Mediterranean shore, manakish is the pizza of Lebanon, and it is a popular breakfast food. According to tradition, women bake bread at a communal oven each morning to be used throughout the day. While performing this chore, they flatten small portions of bread dough to cook quickly. Topped with seasonings, these manakish are eaten for breakfast.

Traditional manakish toppings include thyme, sumac and sesame seeds. Like in most other cultures, pizza began as a cheap food eaten mainly in poor neighborhoods. Over time its convenient appeal spread to other strata of the culture and it became pervasive. Manakish is often served with fresh mint, sliced tomatoes and cucumbers on the side to enhance the meal. 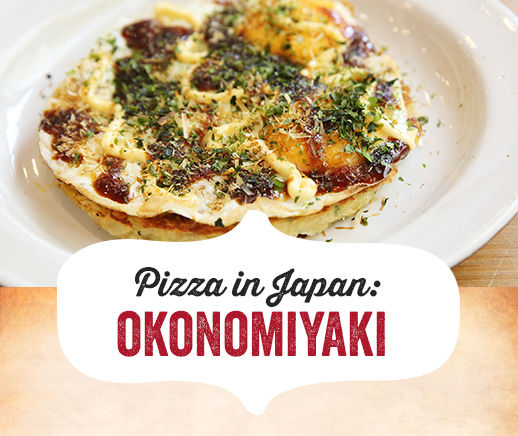 In Japan, okonomiyaki is a dish that resembles pizza in that it is a rather free-form group of toppings on a flat, circular base. Okonomiyaki is built on a disc of shredded cabbage cooked in a batter similar to pancake. The texture of this base varies by preference. Some prefer it dry and stiff while others like it to have a soft, almost custard-like center.

Hiroshima-style okonomiyaki has ingredients piled up on it like a traditional pizza. Those ingredients can be almost anything, from fried eggs to seafood. Okonomiyaki is considered a good way to clean out the refrigerator. Kansai-style okonomiyaki mixes all the ingredients into the batter before frying. Both types are topped with a variety of spreads and sauces before serving.

In the last couple decades, Neapolitan pizza has traveled to Japan from Italy and settled in. Japanese chefs brought the flavor back with them from their European travels and are working to recreate it for Japanese customers. In the sushi capital of the world, diners are crazed over a circle of dough covered in tomato sauce, basil and cheese.

Pizza arrived in Korea in the 1980s with American restaurant expansions. Today, the Korean pizza culture is exploding with variations. While it is possible to get a Neapolitan pizza in Korea, the locals tend to favor pizzas that feature combinations of their own familiar foods. It is not unusual to get a pizza topped with:

No matter where you live, experimenting with different flavor combinations is part of the fun when it comes to pizza. Whether you want to try something new or just get your old favorite, pizza is always a good choice.

Giordano’s was born in Chicago, where we perfected the best deep-dish pizza in the 1970s. Since then we have expanded and embraced the different interpretations of pizza around the world. Our Chicago-style and Neapolitan pies use fresh ingredients to bring you the best flavor representation pizza has to offer with the flexibility of eat-in, take-out, and online ordering for your busy family.