The Professional Sports Teams of Colorado 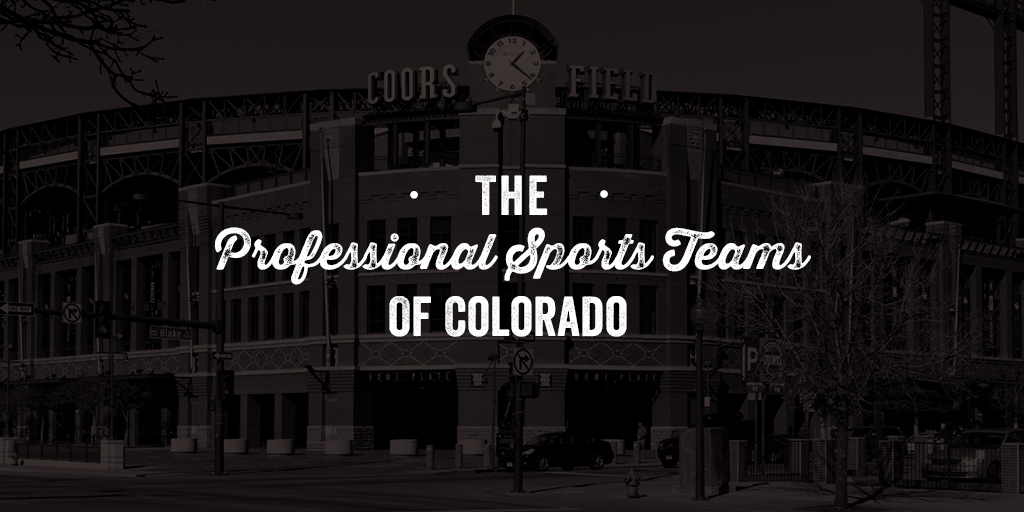 Colorado is famous for its breathtaking scenery, vibrant arts scene and delicious dining destinations. Of course, it also has a full roster of amazing professional sports teams! Prime-time sports are on the schedule nearly every week of the year, and thankfully, most of the arenas and stadiums are within a quick cab ride from the heart of Denver.

We’re proud to have a location in the Mile High City, and we’re ready to help you cheer on the city’s dozens of talented players! Here’s a quick rundown of everything you need to know about the Denver Broncos, Colorado Avalanche, Denver Nuggets, Colorado Rapids and Colorado Rockies.

Coors Field is located just steps from the Denver Union Station in LoDo, surrounded by a swarm of local breweries. Giordano’s is less than a mile away from this beautiful ballfield, giving our guests the perfect opportunity to grab a delicious slice of deep-dish pizza before the first pitch is thrown.

Baseball has a long history in Colorado, beginning with the state’s first official team in the 1860s known as The Denvers. However, it wasn’t until the 1980s that Colorado became a contender for a Major League Baseball team. As the National League readied for an expansion, Denver residents voted in favor of a tax increase should they be awarded a franchise. On June 10th, 1991, Denver was selected. They were unanimously approved, and less than a month later, the Colorado Rockies were born.

Our National League team has advanced into the playoffs a few times since its inception. The Rockies were National League Wild Card Winners in 1995, 2007, 2009 and 2018 and National League Champions in 2007. Most recently, the Rockies made their second consecutive advancement into the postseason in 2018 after defeating the Chicago Cubs in the NL Wild Card Game. Unfortunately, they fell to the Milwaukee Brewers in a quick sweep. The Rockies, once awarded the Baseball America Organization of the Year, are still swinging for the fences.

While we have yet to clinch a World Series, our team boasts a bench of members decorated with awards like the Silver Slugger Award, Gold Glove Award and Manager of the Year Award. Right fielder Larry Walker was voted by our fans as the most outstanding player in Rockies history, receiving the SHL Hometown Heroes award in 2006. Todd Helton is perhaps the only player that rivals his performance. The first baseman was a Hank Aaron Award winner and is the only Rockies player with his number retired.

Baseball season in Colorado means one thing — spending time outdoors enjoying the warm weather! We jump at every opportunity to settle into Coors Field and watch a doubleheader. For those who can only catch a few innings on TV, Giordano’s opens up the outdoor seating on our patio so baseball fans can watch the game while relaxing in the sun. Come in for ice-cold beers, tasty wings, and of course, the ultimate Chicago-style pizza.

DICK’S Sporting Goods Park and Commerce City are just northeast of downtown Denver, neighboring the Rocky Mountain Arsenal National Wildlife Refuge. While it’s not as close to the heart of our city, we’re thankful that we can grab a pizza to go from Giordano’s and drive to a Colorado Rapids game in less than 30 minutes.

The Colorado Rapids became a Major League Soccer charter club in the mid-90s, making it to the MLS Cup in just their second year and to the U.S. Open Cup in 1999. This Western Conference team was able to clinch the MLS World Cup in 2010, defeating FC Dallas. Over the last two decades, we’ve had plenty of other unforgettable moments, including an amazing Fourth of July game in 2001 at Mile High Stadium in which club legend John Spencer scored three goals — he became lead scorer in his first season.

In 2003, the Colorado Rapids established The Gallery of Honor to recognize the all-time top players in the club’s history. Marcelo Balboa and Paul Bravo were the first inaugural inductees, followed by Chris Henderson, Pablo Mastroeni, John Spencer and Conor Casey over the next 14 years. 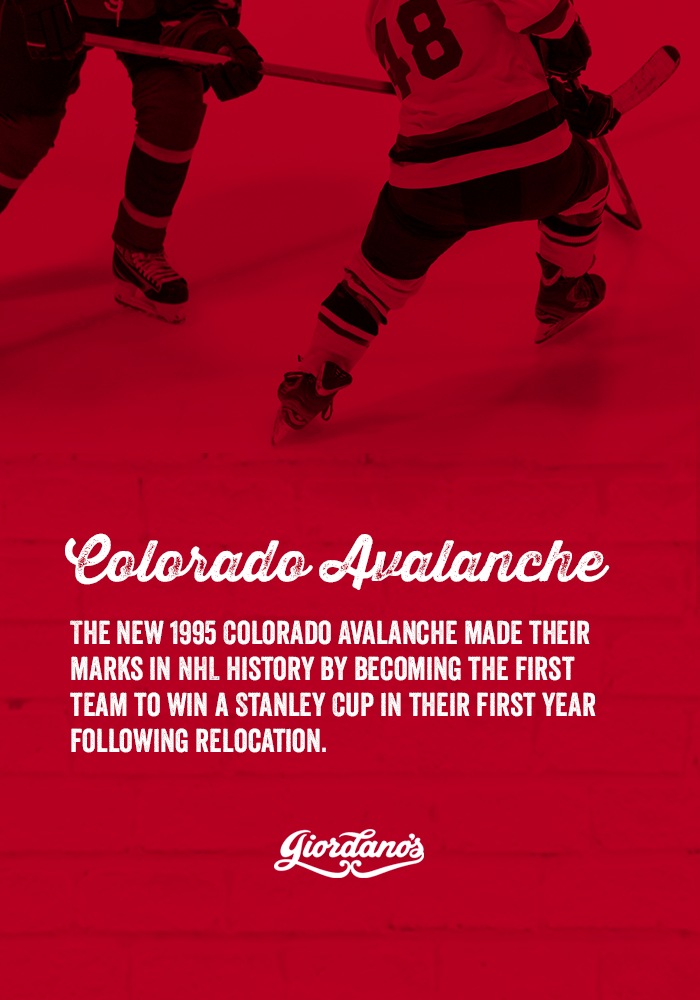 Just one mile away from the best pizza you’ve ever tasted, the Pepsi Center is located right near the University of Colorado Denver and Elitch Gardens. Trust us — there’s nothing like watching the Avs take the ice, then chilling out at Giordano’s with a cold beer and warm slice to talk about every top-shelf goal and unbelievable save.

Unlike the Rockies and the Rapids, the Avalanche team has a history that predates its arrival in Colorado. In 1972, the Quebec Nordiques were founded as a charter franchise for the World Hockey Association. Within the next five years, the WHA would merge with the NHL, and the Nordiques would be sold. They relocated to Denver in 1995. Right away, the new Colorado Avalanche made their marks in NHL history by becoming the first team to win a Stanley Cup in their first year following relocation.

The hits kept coming as the Avs won another Stanley Cup in 2001. Although we have yet to notch a third Stanley Cup Finals victory in the record books, we’re still the only team to have won the cup in each visit to the final games. Our history is far from over — the City of Denver reached an agreement to keep the Avalanche in the city until at least 2040.

Denver also has a few players who were recently named to the NHL’s 100 greatest all-time players list. Patrick Roy, Ray Bourque, Peter Forsberg and Joe Sakic — as well as two wingers who played for the team for a short time, Jari Kurri and Teemu Selanne — were added to this list in 2017. Many of the team’s former players — like Dave Andreychuk and Paul Kariya — are also in the Hockey Hall of Fame.

When the Avalanche aren’t shredding the ice, the Denver Nuggets are making buzzer-beaters and slam-dunking their way around the Pepsi Center. Of course, Giordano’s is the best place in the city to watch every game when the Nuggets hit the road. We’re ready to serve up plates of garlic parmesan fries, calamari, fried mozzarella triangles, flatbread and cheese curds to get you fueled up for the game.

Although the Denver Nuggets as we know them today were founded in 1976 when they entered the National Basketball Association, basketball in Colorado goes all the way back to the 1930s. This quick timeline highlights the many names of the city’s teams:

Regardless of what they’ve been named, fans have always cheered for Colorado’s home basketball team. When the Nuggets came to the NBA in 1976, they grabbed a few division titles right out of the gate. Even though we have broken through to the playoffs, we’ve had ups and downs through the years. Star players like Alex English and Dikembe Mutombo placed the Nuggets front and center in the NBA’s spotlight in between the team’s transitionary and rebuilding years from 1989-1991, 1997-2003 and 2013 to the present.

One of the recent highlights of our franchise is the seven-season sensation that was Carmelo Anthony. With Anthony amassing more points than nearly any player on the Nugget’s roster — not to mention almost every player in the whole NBA — the Nuggets made it into the playoffs every single year from 2004 to 2010. Since then, the Nuggets have had operational and roster changes, building a new and brighter future for a team that’s long overdue for their first NBA Finals victory.

Who says a team needs an NBA Finals championship to have championship-caliber players, though? The Denver Nuggets have sent remarkable players to the paint for years. Alex English was a dominating force in the NBA and the leading scorer in team history. Dikembe Mutombo blocked more shots in five seasons than any other player on the team, past and present. Dan Issel, David Thompson and Carmelo Anthony have each etched their names in franchise history, and let’s not forget that a certain Allen Iverson once donned our jersey.

4,048 yards stand between Mile High Stadium and the Mile High City’s best pizza. Or, if you’re a stats fanatic, Giordano’s is so close to the Bronco’s field that Peyton Manning has thrown this distance in each of his 14 seasons. Thankfully, you can make this 2.3-mile journey easy on your throwing arm by simply driving down to Giordano’s to pick up a few of Mama Giordano’s famous Italian Easter Pies for your tailgate party.

Here’s a bit of sports trivia for you — the Broncos owe their thanks to Major League Baseball. Originally, the city of Denver had an interest in adding a team to the then-proposed Continental League, another baseball faction. This league idea was abandoned and so were the city’s hopes for a baseball team. However, the expansion of their minor-league stadium coincided with the creation of the American Football League, giving Denver an opportunity to create a football team that would win 15 divisional titles and three Super Bowls.

Unfortunately, it took many years until the Broncos could break into the playoff picture. The late 1970s and early 1980s saw the team and their Orange Crush defense visit the playoffs and even one Super Bowl. The arrival of John Elway in 1983 lead to three more appearances — and losses — in the big game, but finally, in 1998 the Broncos won their first Super Bowl. They went back-to-back as Super Bowl champions in 1999, and unfortunately, Elway celebrated with a retirement from the game.

Elway returned to manage Denver’s football operations in 2011. After a brief stint with Tim Tebow leading the offense, Peyton Manning was signed to the team in 2012. Manning clinched a third Super Bowl victory for the Broncos before following in Elway’s footsteps with retirement in 2016. The Denver Broncos today are still fighting their way up the AFC to reclaim their position as one of the best teams in the conference — and you’d better believe that everyone in the Mile High City will continue cheering them on.

When you sit down and try to pick out the best Bronco in franchise history, you’ve got a handful of options that make this a tough decision. Obviously, John Elway is regarded as one of the best quarterbacks of all time — but so is Peyton Manning. Floyd Little and Terrell Davis moved the chains by relying on their speed over their QB’s arm. Defense wins championships, which is exactly why Champ Bailey, Von Miller, Steve Atwater, Karl Mecklenburg and Randy Gradishar deserve equal consideration.

What about Shannon Sharp, a Pro Football Hall of Famer and Bronco’s legend in his own right? Or Gary Zimmerman who is also considered one of the best Minnesota Vikings in franchise history? Steve Foley — and so many others on the Orange Crush defense of the late 1970s and early 1980s — should get a vote as well. We know one thing for certain — the Denver Broncos have sent players to the field who have given us some of the best NFL moments of all time.

Whether you’re cheering on Colorado’s native clubs or rooting for your own home team while visiting the Centennial State, you deserve a meal that’s fit for a champion. Join us at Giordano’s for game time! Fuel up before you head down to Mile High Stadium or warm up with a deep-dish pizza after the Avalanche carve up the ice. From the first preseason games to the final seconds of overtime in the postseason, our oven is hot and serving up the best stuffed pizza you’ll ever taste!

Bring your game-day crew into Giordano’s and sink your teeth into a cheesy slice of deep-dish pizza that tastes like sweet victory!